Stephen Ground lived for years in a remote, fly-in community in Canada’s north after his graduation from York University, then returned south to co-found Toronto-based collective Pearson House Films. Find his work in The Esthetic Apostle, Flash Fiction Magazine, Sky Island Journal, The Sunlight Press, and elsewhere, or at http://www.stephenground.com.

I parked down the street because my neighbour’s boyfriend liked my spot better than looking for somewhere to parallel his doorless Jeep. He was smoking and drinking on her step and, feeling brave, I met his gaze as I approached; he speared a tallboy and shotgunned it staring me down, crushed the can then tossed it on my stoop. I rushed inside, smoked crumbs in my cracked bong, ate a bowl of Lucky Charms, slurped the milk then fell asleep with the tube on, hand down my pants. Brightly-Spandexed infomercial blondes twisted, bounced, bent, and grinned like producers would discover them while their mistresses stretched, hunt them down and whisk them away, lights dazzle and oozing opportunity, enough to say Fuck you to everyone back in Red Deer who said they’d amount to nothing more than show meat for sweaty creeps, that youth fades and you can’t fix dumb. I dreamt of one stuck a quarter-beat off, waking with my eleventh alarm.

I shuffled to the washroom – an oily fleck on the wall next to the mirror, to be dealt with later because I was so late I was risking no morning joe. I raced to work, punched in, existed, ate lunch, took an extra ten on my afternoon coffee because why the fuck not, punched out and meandered home invisible to others, but I saw them.

The fleck had become a gouge, nickel-round – dark, but cold air whispered. I stuffed it with cotton, left by a chick I dated an hour, and poured a big bowl of Charms. I moved yesterday’s bowl to put up my feet, clicked on the tube but my pirated feed had been discovered again; ate, then crashed on the couch. I woke after dark and stumbled to piss, but breath rattled from the washroom, the gouge fist-sized. I was tired enough to forget, but by morning my head fit, strange because the other side was where I parked when Asshole wasn’t around. No Shawarma Shack on the corner, or busted streetlamp where my dealer parked. Just the cold, black hole.

Late again, I tugged on yesterday’s shirt, rubbed dried milk off the collar with spit, then raced to work; punched in, existed, ate lunch, sat on the can for ten minutes after lunch and checked fantasy football on my phone because why the fuck not, punched out and charged home. Asshole was in my spot so I parked behind him, and rushed inside. Icicles hung from the ceiling, windows frosted, the washroom engulfed. So tall and broad I could step right in.

A tiny voice rode frosty air, swirling under my arms, lifting me onto my toes. Legs lurching inside, light dimmed till it narrowed, the ceiling fell, and I hunched, crawled, scrabbled to a dead end. Scratching, fighting to push further, everything flipped and end became bottom, the distant tunnel’s mouth creaking closed like a cursed pyramid’s exit.
I held my breath. The tiny voice sang softly. 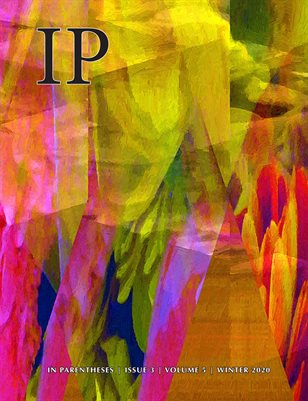 By In Parentheses in IP Volume 5